Hi, how can we help?

Search the knowledge base or choose a category below

Multi-TOC for World of Warcraft Addons

TOC (Table of Contents) files contain information about your addon (such as the addon name and description.) In addition the TOC file contains instructions on how the addon should be loaded by the Blizzard client.

Multi-TOC is a new feature which was implemented by Blizzard following the release of The Burning Crusade game version. The feature allows a single addon to have multiple TOC files. This means that you can have a single project that supports different game versions, often referred to as ‘instances’ or ‘flavors’. By having a single project suited for different flavors,  your project becomes more accessible for users and saves you time in setting up multiple project pages, uploading files or editing multiple change logs.

Multi-TOC requires certain prerequisites to be correctly loaded in-game, as well as additional steps so that the CurseForge App correctly loads the relevant file when launching each of the game versions.The following community-created articles can be used as a reference for creating TOC files:

Please note that these articles are not part of CurseForge or Blizzard. As such CurseForge and Blizzard are not responsible for any content shown on these websites or providing further support regarding the information provided in these community created articles.

Every TOC file needs to start with the addon name used in the parent folder (For example addon_name.toc in the addon_name folder). If you don’t use the same name - the CurseForge validator may fail the upload or the addon will not be recognized by the Blizzard client.

Interface version numbers for each flavor can be found in the community articles mentioned above.

Example from the Questie addon: 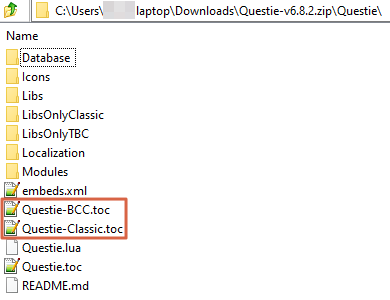 In the example above, a single project supports two flavors - Burning Crusade and Classic.

In the screenshots above you can can see the interface # specified for each file, both made available in the Folder Name. The .toc file names and the Parent folder name are both ‘Questie’, ensuring that the CurseForge App correctly associates each file with the relevant flavour in-app.Note - It is under the responsibility of the addon authors to make sure this is up to date and that the project is flagged correctly on CurseForge. You can Contact an Author or report and issue for them in case they have not set up the file correctly.

How to Tag Flavors in your CurseForge Addon File Page

When uploading the file you can tag which versions are supported:

Note - You can always edit your file tags if needed.

Did you find it helpful? Yes No

Send feedback
Sorry we couldn't be helpful. Help us improve this article with your feedback.

Ask the community Suggest a feature